The North C/D Boys All-Stars opened the afternoon session of the 2020 McDonald All-Star Games with a 101-83 victory over the South. The North jumped out to a 53-42 halftime using a balanced scoring attack, with no player scoring more than 7 points. Hall-Dale’s Patrick Rush tallied 10 first-half points for the South.

The North outscored the South 48-41 in the second half to extend their lead. Leading the North in scoring was Brayden Bradbury, a 6’2” guard 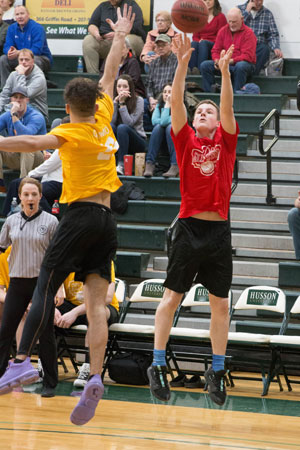 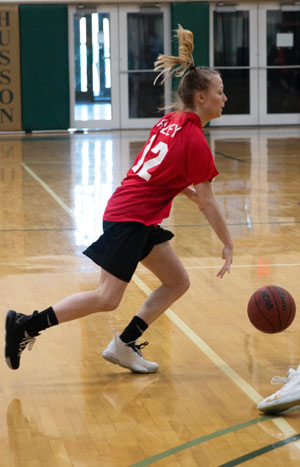 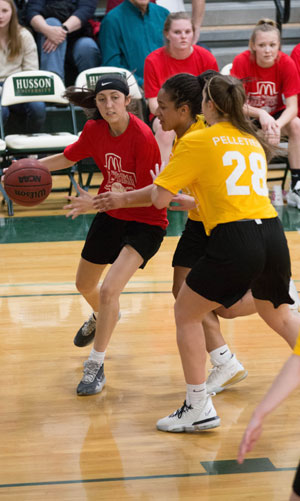 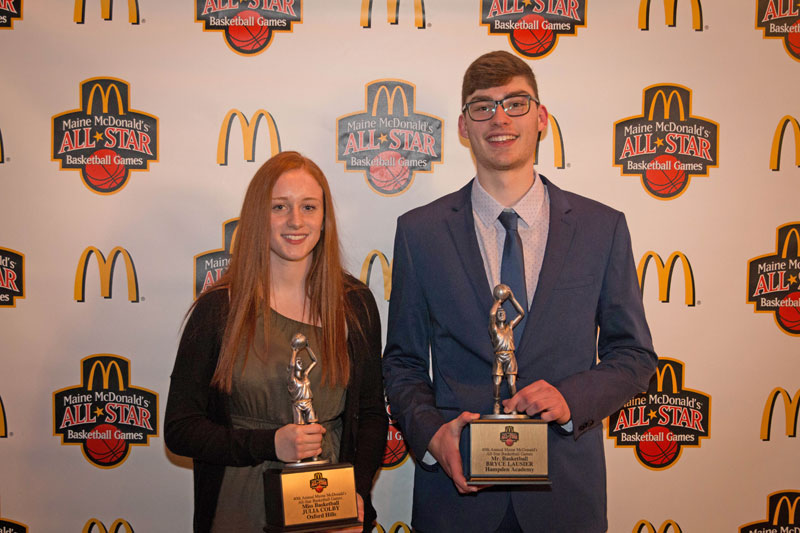 Bryce Lausier and Julia Colby have been named Mr. & Miss Maine basketball for 2020. The announcement was made at the McDonalds Senior All Star Banquet at the Anah Shrine Hall in Bangor, Maine on March 6th. 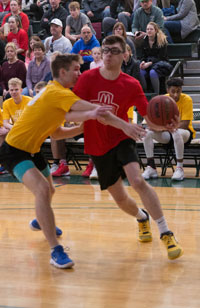 Lausier, a 6'4" guard for Hampden Academy in Bangor, averaged 27.7 points, 5 assists, and 8 rebounds per game for the Broncos in his senior year. He was also the Kennebec Valley Athletic Conference Player of the year for 2019-20.

Lausier led Hampden to a 17-1 regular-season record and the top Heal Point seeding in Class A North. For his performance in the team's Northern title run, Bryce was named the outstanding player-sportsman of the regional tournament. He went on to score 23 points in the state championship game as Hampden Academy defeated York High School 65-56. 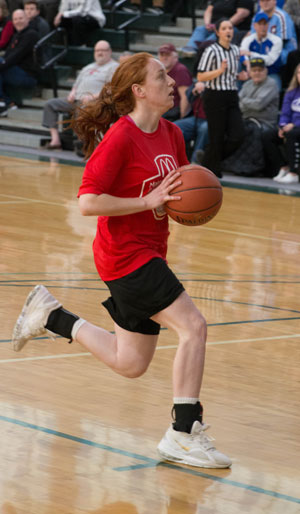 Colby, a 6'6" point guard for Oxford Hills High School, averaged 17.4 points, 3.1 assists, 3.6 steals, and 4.8 rebounds per game in her senior season. She was named a KVAC First Team All Conference All-Star and the Class AA North Player of the Year after while leading the Vikings to a 17-1 regular season record. The Viking senior led her team to Class AA state championships in her junior and senior years.

Colby was selected the outstanding player of the regional tournament for the second straight season in leading the Vikings to the AA North Championship. She then scored a game-high 22 points as Oxford Hills defeated South Portland 49-38 in the state final, their second straight state championship. She plans to attend New York Institute of Technology in the fall to study nursing and play basketball. 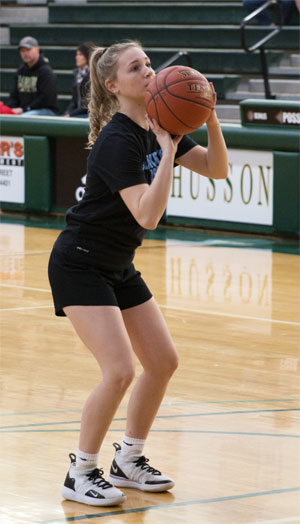 took place prior to the Senior All-Star Games during McDonalds All Star Weekend. Grant, who was also the 2019 state champion, equaled her 2019 total by sinking 49 of 50 shots. The Dexter High School junior had made all 50 of her shots at the regional championship. Also competing in the state championship were regional champions Faith Sjoberg of Presque Isle HS, Courtney Rollins of Carrabec HS, and Carolyn Clement of Greely HS.

MacDonald, a 6'4" senior guard at York High School and McDonalds All Star,

dropped in 47 of 50 of his shots to claim the boys' championship. Other regional champions who competed in the festivities were Dalson Watson of Fort Fairfield High School. Caleb Crocker of Foxcroft Academy, and Forest Hills High School's Mason Desjardins.

Congratulations to all the competitors for their outstanding marksmanship, good spirit, and regional championships. 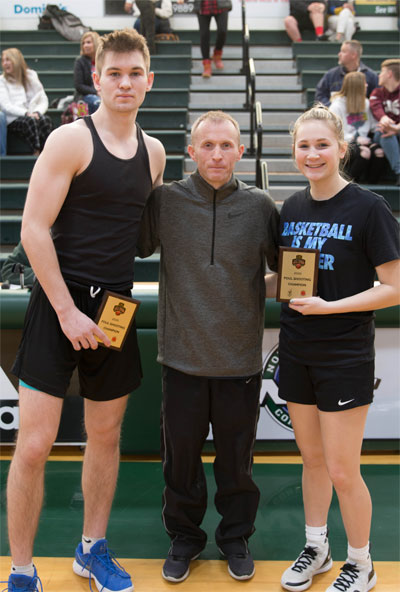 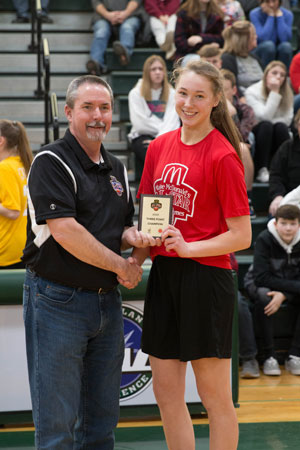 The contest was held as part of the McDonalds Senior All Star Weekend at Husson University.

Werner outshot some of the best long-distance shooters from across the state to claim the title. 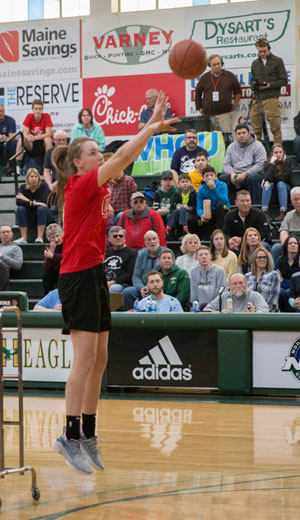 Werner averaged 15.8 points and 7.9 rebounds per game for the Eagles during her senior season. She is a High Honors with Distinction scholar who scored over 1,000 points in her four seasons for the Oakland school. She plans to attend Monmouth University in the fall and play basketball.

Bickford made it to the finals along with Pamba Pamba of South Portland HS and Te'Andre King of North Yarmouth Academy. Pictured here is his qualifying dunk.

Bickford plans to attend the University of Maine to study Computer Science and play basketball for the Black Bears. 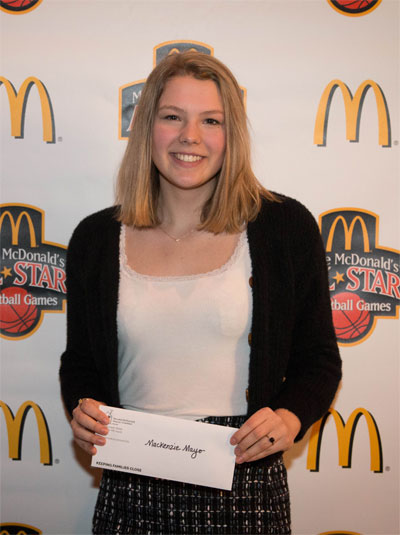 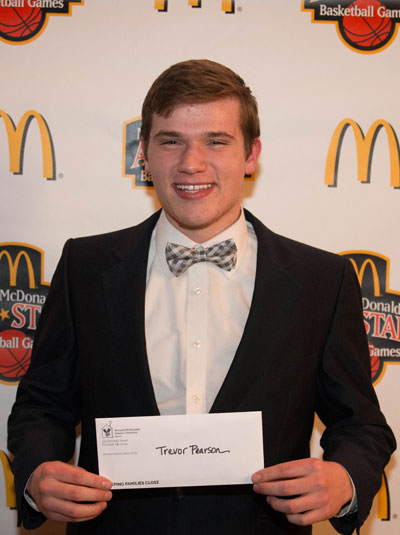 Mackenzie Mayo of Messalonskee High School and Trevor Pearson of Brewer High School were awarded the 2020 Maine Mcdonald's Academic All-State Scholarships at the McDonald's All Star weekend banquet in Bangor on March 6th.

Mayo, a 5'10" senior center for the Eagles, averaged 5.6 Points Per Game and 4.7 Rebounds Per Game. She also played Club Volleyball and was a member of the Math team, was Class Vice President in her sophomore and junior seasons, and was the National Honor Society president. She plans to study Marketing in college.

Pearson, a 6'1" senior forward for the Witches, averaged 17 PPG, 2 Assists Per Game, and 6 RPG. He also plays varsity baseball and was a member of the National Honor Society. He was also a member of the Student Athlete Advisory Council and served as its President in his junior and senior years. He also was a participant in the "Maine High School Quiz Show his senior year.