Kolleen Bouchard of the Houlton High School Shiretowners was named the 2018 Miss Maine Basketball at the Maine McDonald's Senior All-Star Banquet in Bangor on March 9th. Bouchard, who led Houlton to State Championships in 2015 and 2016 and regional titles in 2017 and 2018. She is the second member of her family to be named the outstanding MABC player of the year. Her brother Kyle was names Mr. Basketball in 2015. Kolleen plans to attend Bentley College in the fall. Other Miss Maine finalists were Page Brown of Boothbay Regional High School and Emily Wheaton of Presque Isle High School.

Terion Moss of the Portland High School Bulldogs earned the title of Mr. Maine Basketball for 2018. The 5 foot 10 inch guard averaged 19.9 points, 4.6 assists and 4 rebounds and 2.9 stals this past season. He is the two-time Gatorade Boys Basketball Player of the Year. He took the awards presentation as an opportunity to announce his verbal commitment to play for the Universtiy of Maine next season. Moss led Portland to State Class AA Championships in 2016 and 2017 and a 17-1 regular season record this past season. Taylor Schildroth of George Stevens Academy and Ian McIntyre of Hampden Academy were the other two finalist. 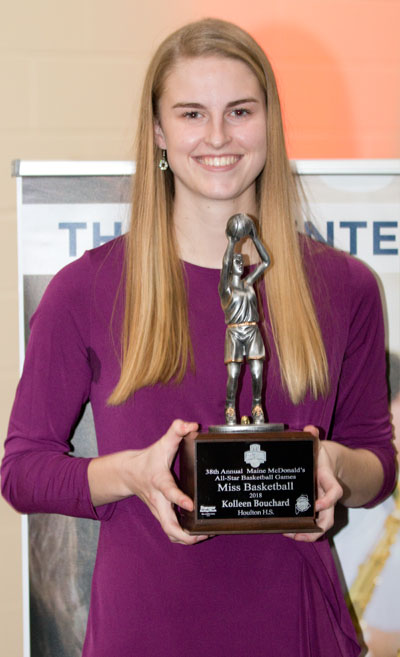 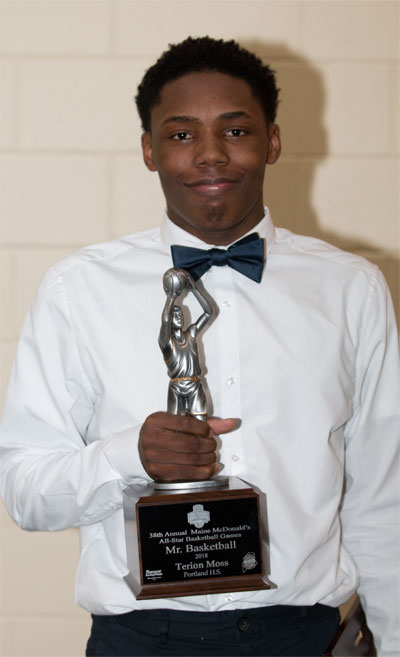 Four boys and four girls came together at the 2018 Maine McDonald's Senior All-Star weekend to vie to be crowned State of Maine Foul Shooting Champions prior to the All-Star Contests in Newman Gymnasium at Husson Universary on March 10th. Monmouth Academy's Kaeti Butterfied, winner of the Central Division, drained an amazing 49 of 50 shots to capture the championship for the girls. Emily Wheaton of Presque Isle HS and Meghan Graff of South Portand HS each made 46/50, while East Region Champion Chelsea Crockett of Nokomis made 44.

In the boys competition, Colby Archer of Old Town HS and Nicco Pitre of Falmouth HS tied with 48/50 to force a best of 10 shootout. Pitro, who had made all 50 of his shots in capturing the South Region Championship hit 8 of 10 shots. Archer then drained 9 of 10 to win the State Crown. Central Region Champion Marshall Doyon of Mt. Blue sank 43/50 of his free throws while Reece Dannenberg of George Stevens Academy dropped in 37.

Congratulations to all the competitors. 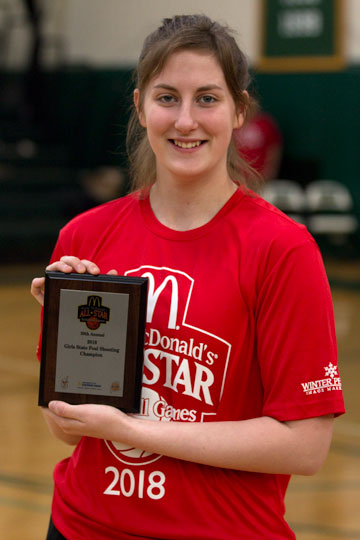 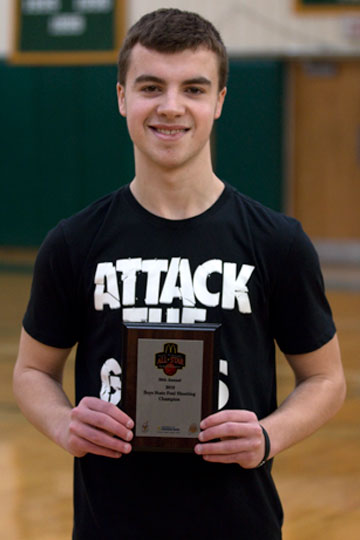 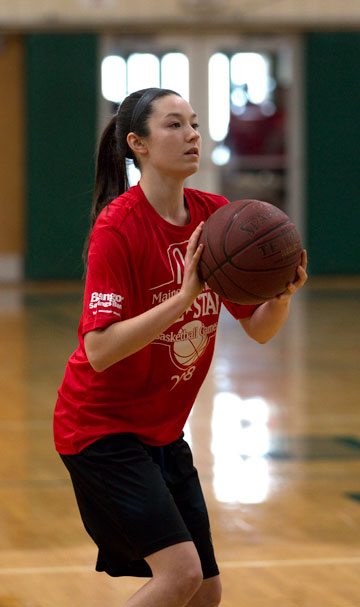 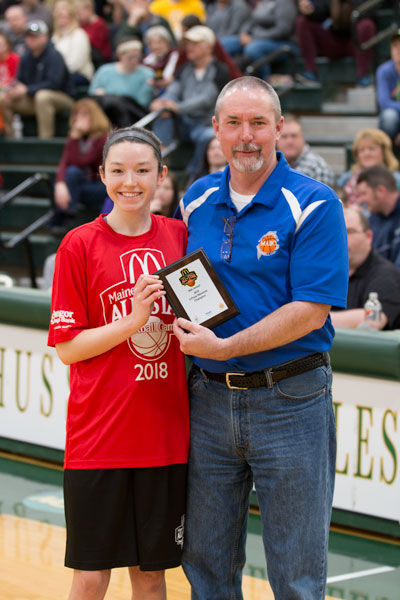 during the All-Star Weekend festivities at Husson University in Bangor on March 10. I the competion, each player was allowed two dunk, with the best of the two counting. Godfrey avanced to the final 3 along with high school teammate Keenan Marseille and Nolan Haggerty of Yarmouth High School.

Godfrey's dunk of the day was this thundering two-basketball jam that wowed the basketball crowd. 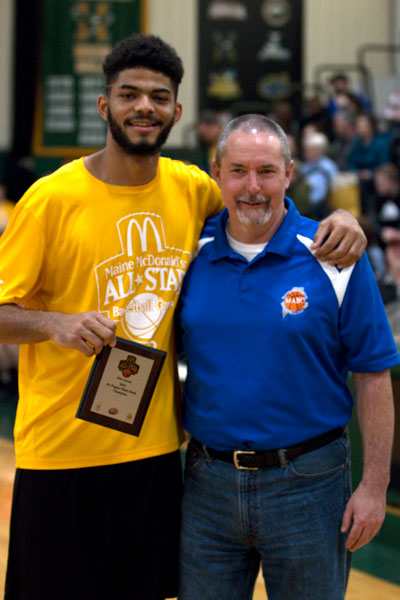 Bangor, Maine: Despite an outstanding display of long range shooting by Emme Poulin of Cheverus High School, the South AA-A-B girls were able to capture an 84-81 victory in the first game of the 2018 Maine McDonald's Senior All-Star Saturday at Husson University. 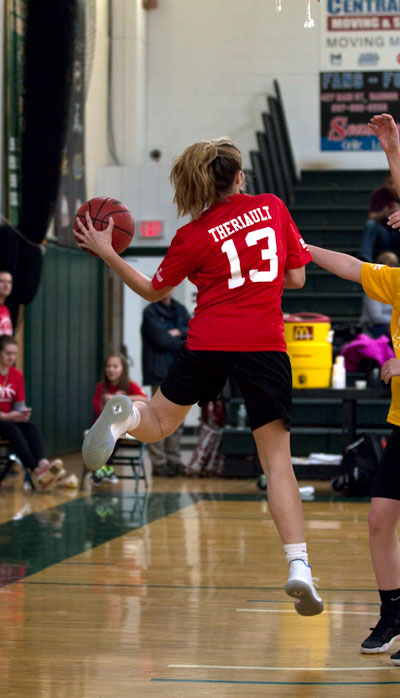 Leading the way offensively for the South was Megan Graff of South Portland with 19 points. Poland's outstanding guard Nathalie Theriault showed a unique ability to get to the basket to score or dish to her teammates and finished with 15 points. Lake Region's Chandler True, who would later win the three-point competition, scored 13 points. Other players scoring in double figures were Miranda Montgomery of Marshwood HS with 12, Sabrina Armstrong of Brunswick HS with 12, and Scarborough High School's Sophie Glidden with 10.

Poulin drained seven 3-pointers on her way to 23 points. Other top scorers for the North were Grace Phillipon of John Bapst HS with 14 points, Allyssa Turner of Messalonskee HS with 12, and Presque Isle's Emily Weaton with 11.

The South led 46-33 at halftime and appeared to be on their way to a comfortable victory before the North mounted a late-game comeback, pulling to within 84-81 with 50.2 seconds remaining before the South held on for the victory.

In a game where defense was put aside in favor of "showtime", the North AA-A-B boys took a 145-120 victory over the South in the second game of the Maine McDonald's Senior All Star day at Husson University. 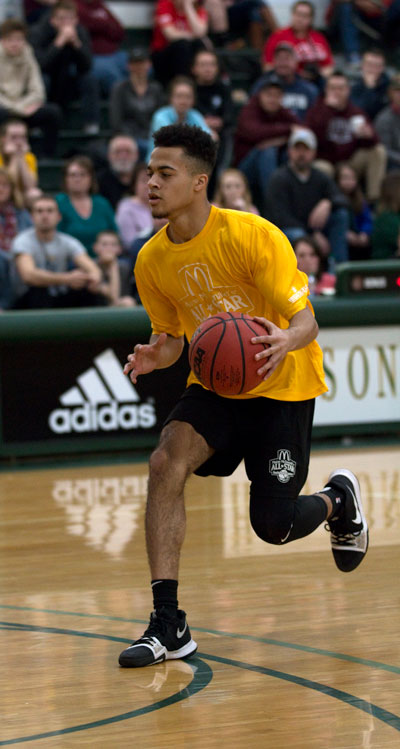 Dunks and 3-pointers were the order of the day in this contest, and the boys were more than willing to display their offensive skills. Herman High School's Jacob Godfrey, who would later in the day win the Slam-Dunk competition, scored 29 points to lead the North. His regular season teammate Keenan Marseille scored 26 points. Mike Gilman of Windham High School scored 23 points, including seven baskets from beyond the arc. Other players in double figures were Griffin Guerrette (Presque Isle) with 16, Mr. Basketball finalist Ian McIntyre (Hampden Academy) with 13 points, and Zach Hartsgrove (Nokomis) with 12.

Noah Malone was top scorer for the South with 19 points. The South Portland star scored 17 of those points in the second half. He was supported by Greely's Jack Kane, who tossed in 18 points (14 in second half). Mason Shink hit 5 three-pointers in the first half enroute to a 17 point total. Also scoring in double figures were Nolan Haggerty of Yarmouth HS with 16 points, Riley Hasson (South Portland) with 14 points,  and Zac Manoogian (Westbrook) with 13 points.

The North, which surpassed the century mark with over 12 minutes remaining in the game, held a 69-59 lead at the half.

Taylor Schildroth led the North C-D All-Stars to a 114-89 victory over its South counterparts at Husson College during the 2018 Maine McDonald's Senior All-Star Weekend. 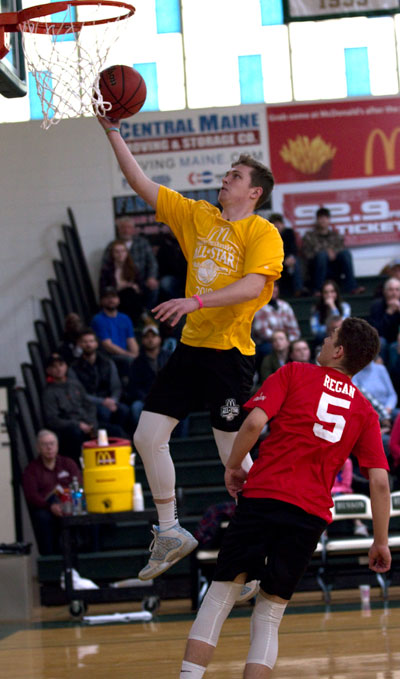 Leading the South was Zach Small of Richmond HS with 27 points. 18 of his points came from behind the 3-point arc. Scoring 19 points was Ian Regan of Old Orchard Beach. Hall-Dale's Jeff Boyer hit 5 threes for 15 points.