Below are the present protocols for the Senior All-Star Game::

For the players: Required to provide proof of a negative COVID test within 72 hours of the event, no matter the vaccination status.

For spectators: Required to provide proof of vaccination and for those who are unvaccinated, proof of a negative COVID test within 72 hours of the event.

For everyone (players, coaches, volunteers, and spectators): Mask wearing will be required at all times unless consuming a beverage. 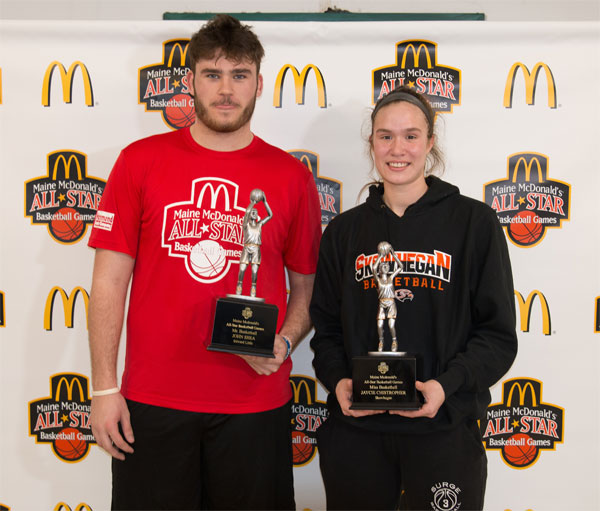 Skowhegan High School's Jaycie Christopher and Edward Little High School's John Shea were named the 2022 Miss and Mr. Basketball by the Maine Association of Basketball Coaches. The announcement was made at the McDonald's Senior All-Star weekend at Husson University on March 12th.

A 6'0" point guard, Christopher averaged 25 points, 11 assists, and 7 rebounds per game for the River Hawks and led them to the 2022 Class A State Championship. Christopher scored a game-high 24 points as Skowhegan captured the first Class A state championship in program history with a 60-46 victory over Greely High School. Christopher has committed to Boston University.

Christopher was selected from a trio of outstanding finalists, including Wells’ Grace Ramsdell and Gorham’s Anna Nelson.

Edward Little star Shea, who has commited to take his talent to the University of Maine, is the second Edward Little player to win the award; EL graduate Troy Barnies won the coveted award in 2007. Shea won the award over star hoopsters Hunter Curtis of Ellsworth and Falmouth’s Brady Coyne.

Shea, a 6'6" Forward/Center, led Edward Little HS to a 16-2 regular season record and a trip to the Northern Maine finals before losing to Oxford Hills High School. He averaged 27 points and 12 rebounds per game this past season,

The girls in red gave the North a split on the day by closing out the All-Star Weekend with a 60-56 victory over the South. 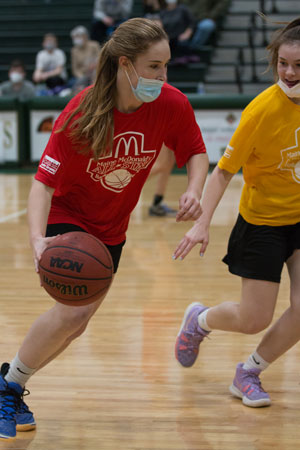 The game was close throughout, with the North gaining a slim 25-24 halftime lead. Luna Perry-St.Peter scored 8 of her 11 team-leading points in the second half to help the North gain the victory. Schenk High School's Hanah Sewall was also effective scoring 9 points for the winners. Stearns High School's Alisyn Alley and Calais High School's Sage Phillips each scored 8 points. Rounding out the scoring for the North was Dexter's Elizabeth Kinney and Makayla Hartsgrove of Katahdin with 7 points each. 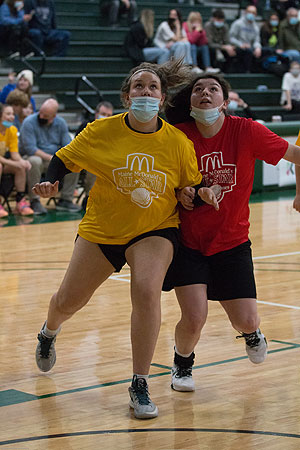 Carrabec High School's Cheyenne Cahill and Boothbay Regional High School's Jaelyn Crocker were the leading scorers for the South with 10 points each. Crocker scored all of her points in the second half. Hall-Dale's Caden Wills and Winthrop's Maddie Perkins each chipped in with 8 points.

McDonald's and the Maine Association of Basketball Coaches would like to congratulate and thank all of the players and coaches for taking part of this great fund raising evert for the Ronald McDonald House.

The South C/D boys erased a 4-point halftime deficit and captured an exciting 98-96 victory over the North in the third McDonalds Senior All-Star game of the day in Newman Gymnasium. 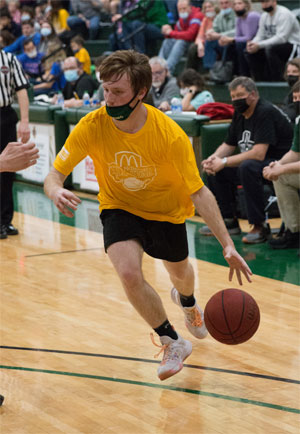 Trailing 47-43 at the break, the North rode the hot hand of Carrabec High School's Daniel Handley to pick up the victory. The 5'9" guard from the North Anson school scored 15 of his game-high 20 points in the second stanza to give the team in yellow the win. North Yarmouth Academy's 5'9" guard Joaquim Bila scored 16 points for the South, while Forrest Hills' Jackman Daigle, Winthrop's Logan Baird, and Madison's Thomas Dean each tallied 12. Wyatt Smith of Dirigo High School added 9 points. 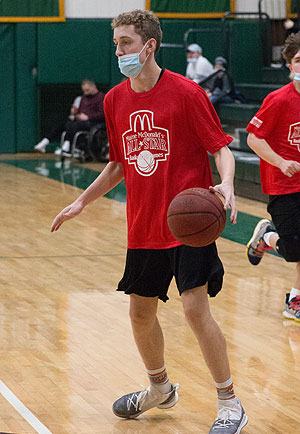 In the second game of the McDonald's Senior All-Star Weekend, the South Boys in the yellow uniforms were victorious, 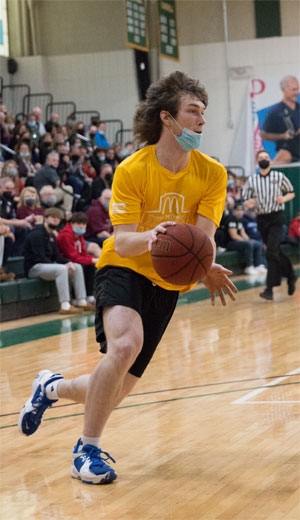 149-128 in a high schoring Boys AA/A/B shootout. Because of the tight schedule with the presentation of awards, the three point and slam dunk contests were not held, but fans were treated to wealth of 3 pointes and thunderous dunks in this game. Leading the South in scoring was Morse High School guard Gabe Aucoin with 25 points, including 16 in the second half. Jake Stowell of Falmouth HS was the second leading scorer fo the South with 20 points. Marshwood's Aiden Sullivan added 16 points and Patrick McKenney of Medomak Valley HS with 15. Other top scorers for the South were Gray-New Gloucester's Jay Hawkes and Yarmouth's Peter Psyhogeas with 12 points each. 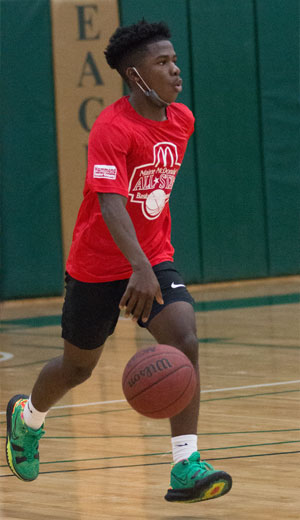 guard David Omasombo, who dropped in 7 shots from behind the 3-point line (6 in first half) enroute to his game high 31 points. Mr. Maine Basketball Finalist Hunter Curtis of Ellsworth HS scored 16 points and Cony guard Luke Briggs scored 14 for the North. Other top scorers were Wani Donato of Portland and Aaron Newcomb of Brewer each added 12 points. Foxcroft Academy forward Filip Brkic chipped in with 11.

The Girls from classes AA, A, and B kicked off the game competition at the McDonald’s Senior All-Star Games at Newman Gymnasium at Husson University in Bangor.

The North jumped out to a 48-24 halftime lead and didn't look back. Led by Cony High School’s Indiya Clark, the North came away with an 85 to 63 victory. The 5’11” guard led all scorers with 17 points. Windham's 5'10" guard Sarah Talon scored 15 points for the North. Faith Sjoberg of Presque Isle 12 points for the team in red. Miss Maine Basketball Jaycie Christopher of Skowhegan and Brooklyn Alexander of Oxford Hills added 9 each. 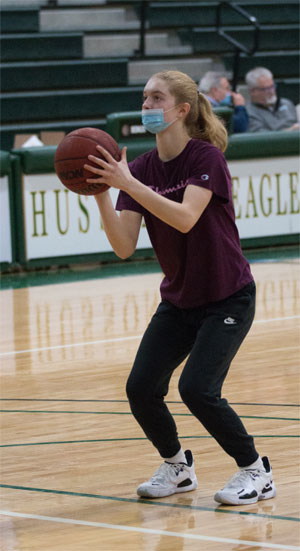 titles at the McDonald's Senior All-Star weekend at Husson University. Oliver, a 5'11" freshman from Hodgsdon High School, captured the championship by making 48 of 50 shots. Other finalists in the competition were Gorham's Anna Nelson, Skowhegan's Jaycie Christopher, and Wells' Grace Boucher. 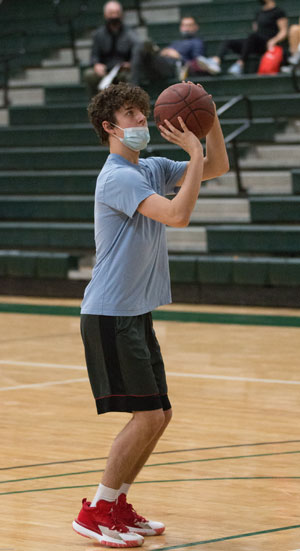 In the boys competition, senior guard Camden Sevigney of Wells High School earned the title by sinking 47 of 50 shots. The other boys finalists were Logan Tardif of Waterville High School, Walker Oliver of Hodgsdon High School, and Quincy Seavey from Westbrook High School. Congratulation to all the competitors.